I once met a woman, no bear with me. This woman said “I don’t like menu del dias!” which to me is a bit of a strange thing to say….i can imagine someone saying “i dont like cheese” and not liking cheese….but if you said “I don’t like lunch” that, to me, is a bit weird. I have a feeling she didnt really know what a menu del dia was and was just repeating something she’s heard someone say, as she kept asking questions like “how many courses do you get?” “do we really get all this for 10euro?”
As i have mentioned, the menu del dia and our very way of life is being eroded and there are some areas of Madrid where it’s nie on impossible to find a proper menu del dia. and even in a civilised place like lavapies-sur (embajadores) they aren’t all over the place at weekends. So when you’re hungry, thirsty, tired and it’s a saturday and the grain of sands left counting down the lunch window are disappearing, it great when you remember a proper Menu Del Dia place is just around the corner.
So i ended up in Meson Valle del Jerte just opposite Frangus just below the rastro. Jerte is a small town near Caceres but for some reason this restaurant has some connection with Portugal. They sell Sagres and Pasteis de Nata, but maybe it’s just because its opposite Frangus and they buy from there. 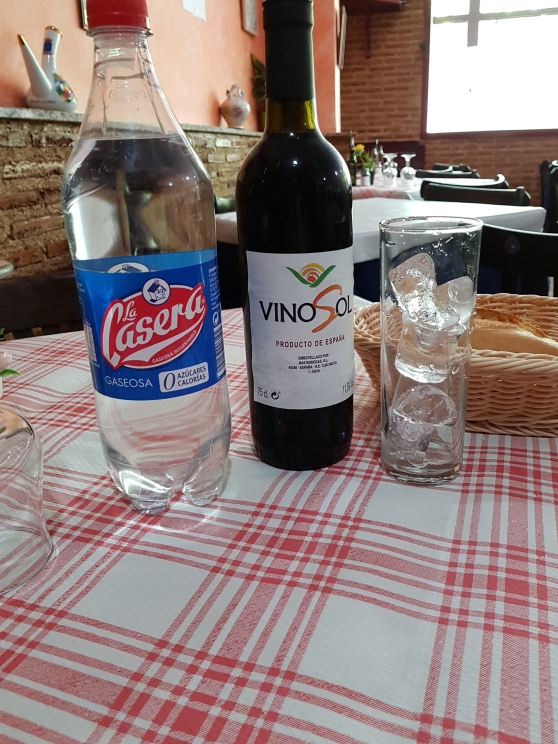 Look at that! That’s a site for thirsty eyes….not only a full bottle of wine for one person, but a large bottle of Casera to mix with it. To be honest, i generally find myself rationing Casera as much as wine.

hell of a lot of seafood paella. i wont be going thirsty or hungry 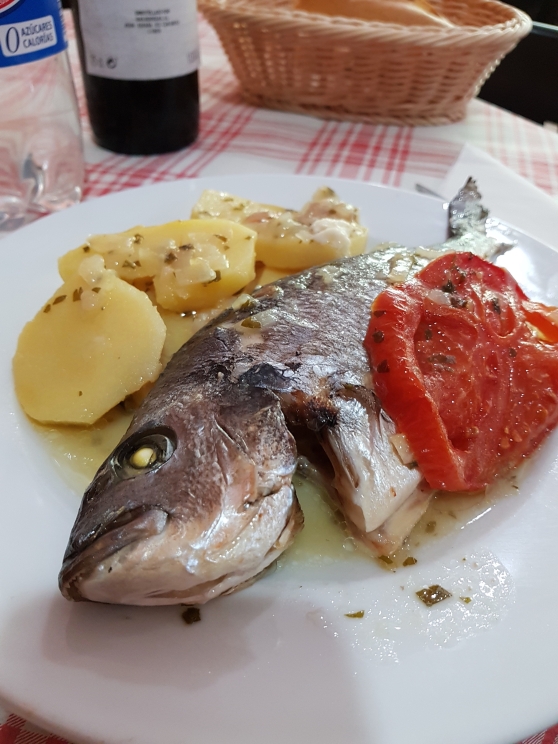 Baked Bream (Dorada), the fish being baked atop the spuds and veggies. Lovely

Old Skool no frills home cooked Menu del Dia. 14 euro (well, it is a weekend). I was able to get myself home and onto the sofa to siesta till half past seven half listening to a hiphop spotify playlist. Tell me if you had a better saturday!

La Caleta has been around for qute a few years but recently moved up the hill from Calle Tres Peces to Calle Santa Isabel and into a huge space that used to be an Indian restaurant. Calle Tres Peces is undergoing quite a change these days…what used to be the most depressing old man bar el aperitivo has been done up nicely in the way these places are transformed by dimmed lighting, half decent music and decent free tapas. Opposite is la infinita….book shop cafe with wifi. Don't order the house white…i have a glass of it in my hand at the moment and it's ropey to say the least.

Back to La Caleta. It's a gaditana bar which means it's a Cadiz themed place. Massive picture of Camarón on the wall as you walk in. Videos of Camarón on big screen at the back. If you've never listened to La Leyenda del Tiempo then I beg you to do so.

Cadiz is also famous for battered and fried fish which is served in paper. Sound familiar? Battering was invented by the Phoenicians apparently and Cadiz was a Phoenician city. There you go. I'm not sure when the English got into battering.

I order a racion of the bienmesabe. This is chunks of cazón, a sort of flat shark (rock salmon in english..if you've ever heard of that) which is cut into chunks and battered. The batter definitely has a bit of cumin in it. Bienmesabe is one of those things that is great when done well, and appalling when, more often than not, fucked up. A bit like the way a pint of Guinness can be the best thing in the world, or quite the opposite. I ordered it as I assumed it would be ther stock in trade as a Cadiz style bar. Very nice.

Not cheap though, that racion and a doble of beer was 13€

Strictly speaking this should have it’s own name because it’s not exactly exactly Bacalhau à Braga, but I figured the Portuguese wouldn’t thank me for yet another saltcod dish in the lexicon…and it’s close enough. It’s also very easy and not labour intensive at all

There’s 3 stages to the dish. Sauce/Spuds/Fish. The sauce is the one you’ll want to start first.

Slice 3 onions and bung in pot with plenty of olive oil. Salt. A sliced red pepper, a sliced green pepper. Lid on and cook slowly until the onions and peppers are soft. A couple of teeth of garlic. A bay leaf or two.A dash of white wine or cider vinegar. I put some honey in there too. I also added some fresh oregano from my garden (well, balcony) and a dash of piripiri. Add a tin of chopped tomatoes, or chop a mature tomato or two. Cook down a bit and then cover and leave with lid on.

Slice some spuds. Stick them in abundant vegetable oil on a medium heat. When the spuds are soft in middle, turn up the heat.

Boil some water in pan. Take off the heat and put your bacalhau loins in the water for a bit. Dry the cod with kitchen paper. Salt & pepper. Fry the fish in olive oil with a bay leave and some garlic.

Serve. Sauce over the fish 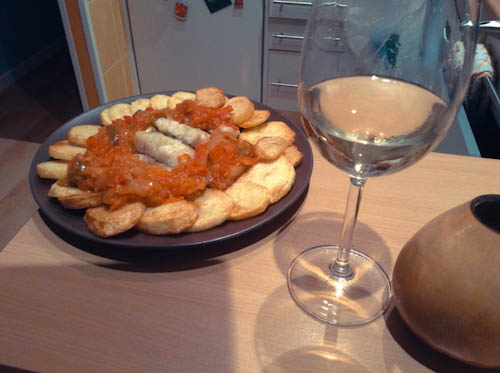