this only opened up a couple of weeks ago on the first floor of the anton martin markert and i’ve been meaning to come here since it did. as anton martin is still a working market, despite all the new bars and restaurants, it closes reasonably early (at 9pm) and i’ve not been able to get my arse in gear early enough.
today me and my arse made it. in gear too. it’s a small place, maybe 3 or maybe 4 standup tables, the open kitchen and a fridge for beer and wine. very pleasant colombian fella who runs or owns it, or works there, asked me if i knew ceviche. silly question, of course i know ceviche…i’ve had it twice. here’s a picture of the menu…that’ll give you an idea 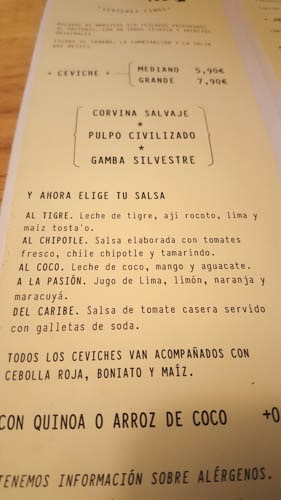 so, first you decide what size you want…i went for grande as i’m a growing lad….then a choice of wild corvina (sea bass), wild prawns or civilised octopus. i went for the civilised octopus. yourman then suggested that as i was already an expert, i’d have had the al tigre before and should try a different one. i went for the al coco…coconut milk, mango and avocado as well as the other usual ceviche things…red onion, weird crispy corn things…and yeah…the other stuff (?). he also asked me how spicy i’d like it and i explained i wasn’t spanish and so would like some flavour, but i’m a bit of a nonce too, so not too much. he was a bit surprised as i was wearing a uruguyan natonal footbal shirt..because i’d said i was english…not because uruguyans will never eat coconut milk. i told him i wasn’t uruguyan, i just liked the colour and didn’t see nationality. he said he didn’t see colour but he had loads of various different national football shirts too. so we bonded, the way men all over the world do..though maybe not in australia, north america or venezuela…but everywhere else.

ordered a beer. why not? aside from the fact that i might have epilepse and shouldn’t drink any beer ever. but come on! it’s a thursday and this homey don’t play by those rules. in a flash the food was ready. i suppose that’s the advantage of not actually cooking the food, but still i’d be amazed if i could toss a salad as quickly as this genius handed over a bole of ceviche. oh…i had quinoa in with the ceviche for an extra 0,60€. hey, i was hungry…i’d been at the gym, if i want to make it as a professional (or amateur) swimwear model, i’ve got to put the hours at the gym in. as my daddy, or roy castle (sometimes hard to diverentiate the one from the other) always said ‘If you want to be the best, if you want to beat the rest, dedication’s what you need’…they were wise men. or one of them was.

anyway, might only have been my third ceviche…but it was by far the best. in fact i’d go so far as to say it was the dog’s bollocks. the bollocks of the dog. if you’re not a brit, a paddy or an ausy, let me tell you…that’s really pretty jolly good.
so, total…2 beers (what? fuck off!), lovely ceviche with quinoa…12€

if you’re very lucky and you get to be here as the greengrocer is closing his stall, you get to see an old man’s arse crack as he closes all the shutters. phwoar! not that i objectify old men who run veg stalls. heaven forbid!