People often ask me, “dave, how many persons are there in god?” And i tend to say to them, “well if you’re asking about your christian god rather than the true gods of old..i’d have to say, in your new puny god there are three divine Persons…the Father, the Son, and the Holy Ghost. You see, unaided by divine revelation, the human mind could not know the existence of big daddy, jc & the spook because it is a supernatural mystery.” Other people ask me “Dave, what’s the best curry house in Lavapiés?” and i tell them “the Moharaj”. Now this might not be as simple an answer as you might think. Much like the christian idea of the theoretical three, the moharaj is not just one curry house, nor two either but three, like the bee-gees or the musketeers, if you ignore D’Artanon. Much like the theologists of old or fans of the bee-gees…i’m not sure which Moharaj is the best or even if any of them are the true “best curry house in Lavapiés”…you could just say that my belief that the Moharaj on Calle Ave Maria 18, is the one true good curry house is just an article of faith. but i believe in the Moharaj on Calle Ave Maria 18 and it has not let me down yet.

In all three Moharajas you’ll find disciples devoted to each, but then lots of people don’t know their arses from their elbows. The (1st) moharaj on Calle Buenavista just off Calle de la Fé (the street of the faith) once burned the garlic in my dopiaza and charges too much for their beer. The (2nd) Moharaj on Calle Ave Maria,26 also charges too much for its beer and has generally gone down hill since the chef and original part-owner had a falling out with Moharaj Calle Ave Maria 26 and went to open his own restaurant on Calle Ave Maria, 18 and called it “moharaj”. Personally, i’d have started my new venture with a new name…but maybe it’s like a boat and it’s bad luck to change the name, or maybe he went off with a few hundredweight of menus he was owed.

Truth is, if you go for a Chinese meal, you generally expect good food if the majority of customers are chinese…much the same with Indian food, you know it’s going to be good if the majority of diners are Brits. Although you might find Brit heretics in Moharaj 1 & 2 too. But they are all arseholes. Moharaj3 is about as close as you’ll get to a real British curry-house outside the sceptered isle. Soon as you’ve sat down you’ll be presented with papadoms and onions and sauces, you’re home.

I’m not a massive fan of very hot food, but I’m assured by real men that the vindaloo is pukka. Can’t think of any curry i’ve wanted to order that hasn’t been on the menu, plus there’s no worries about mancky lamb meat, it’s always pukka too and he fries it before adding to the sauce, which makes it nice and tender.

Last time i was there i had a lamb rogan josh (on the left there) with rice and a naan. the naan is great. 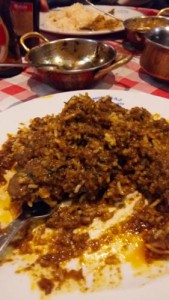 the last two photos i forgot to take until we’d already started eating…so maybe they could be a little better. Maybe.

the last thing i’d say about Moharaj3 is that you get free chupitos without asking, to digest. i’ve even been given a bottle of whiskey to put on the table (although i don’t drink it)…and the owner has even invited me in for a beer on a sunday when i’ve been walking past (which i’ve declined as i don’t drink:( and i’m way too busy for socializing)

In summary, there might be better indians in Madrid, or there might not…but whenever i’ve tried a different indian, i’ve been disappointed. Moharaj3 is a proper pukka, british indian which never disappoints, the service is good and friendly, there’s some free booze and it’s not too far from my house. what more could you need, unless you don’t live with me or near me. Your loss